On a journey with a freelance database specialist

Over the years, freelance IT consultant Lars Hytting Christensen has refined his database skills for the benefit of the clients he helps as a freelance consultant.

In this article, he gives us a glimpse into his exciting journey as a database specialist since the '90s, highlighting some of the key assignments where he has helped make a difference over the years.

He is often found among the client's permanent team of operations specialists. Equipped with specialist knowledge and expertise, he makes important contributions to many different systems, optimizing them, so they run as smoothly as possible. With an in-depth knowledge of databases and the related challenges, Lars Hytting Christensen is continuously working on optimizing the various batch schedulers to make the individual jobs take as little time as possible and require a minimum of manual handling.

Lars Hytting Christensen chose life as a freelance consultant back in 2006 and has since developed his database expertise within the telecommunications and finance sectors, respectively. During his latest assignment, his focus was on automating the many database schedulers for a large financial company.
Over the years, he has specialized in Oracle databases, and these competencies have been a focal point in the many changing projects he has undertaken as a consultant.

During his latest assignment, the work centered on automating batch scheduling.
The assignment allowed him to draw on his extensive experience and many years of fine-tuning databases.

"In recent years, I have mainly been working with Oracle databases, but over time I have also worked with both Borland's Paradox database and IBM's DB2," says Lars Hytting Christensen.
From initially extracting and generating reports from the various databases, it did not take long before his curiosity drove him to improve the program codes in an effort to make the databases run more efficiently.

"During the time where I worked with Paradox, I worked on a project for several municipalities, where the goal was to streamline the disposal of wastewater from septic tanks in areas of Denmark where there was no sewerage," he explains.

Lars Hytting Christensen's task was to export data from the various systems to a single Paradox database, which could then handle the batch scheduling.
"We were able to optimize the municipalities' use of the various contractors and their trucks and thereby reduce the number of empty runs to addresses that did not need emptying," he says.

Assignments such as these, which center on the streamlining of database systems, where it is possible to take responsibility for the systems, is, in Lars Hytting Christensen's eyes, one of the elements that make working with databases exciting.

{   .... it taught me that when working with a database, it is crucial to also take into account the users who will use it eventually, making it a good idea to involve and talk to them first. }

Read also: Experience and structure help IT projects across the finish line

Correct versioning of blueprints was crucial for engineering project

Streamlining databases for the emptying wastewater would later bring about another joint municipal assignment to create a database structure for engineering blueprints needed for the establishment of a natural gas network in several Zealand municipalities in Denmark.
"In connection with the natural gas network, a natural gas storage facility was to be established in Central Zealand. There were thousands of blueprints, with contributions from dozens of different engineers, and it was difficult for the engineers working on this to determine which of the many drawings were up-to-date and most recent. We had to establish a system that assigned version numbers to all drawings, so engineers and contractors could be sure that what they were working with always was recent and updated," says Lars Hytting Christensen.

In general, he describes the attractiveness of working with databases as a combination of the dialogue with the end-users of a database as well as the challenge of getting the individual database to run as efficiently as possible, with the ultimate goal of achieving a complete overview of loading, extraction, user-friendly screens, etc.

Similar characteristics were in play when Lars Hytting Christensen at one point participated in creating a database for the Danish Energy Association. The database was needed to help electricity companies estimate the electricity consumption of private households more accurately based on how old - and thus how power-consuming - electric appliances in the households were. 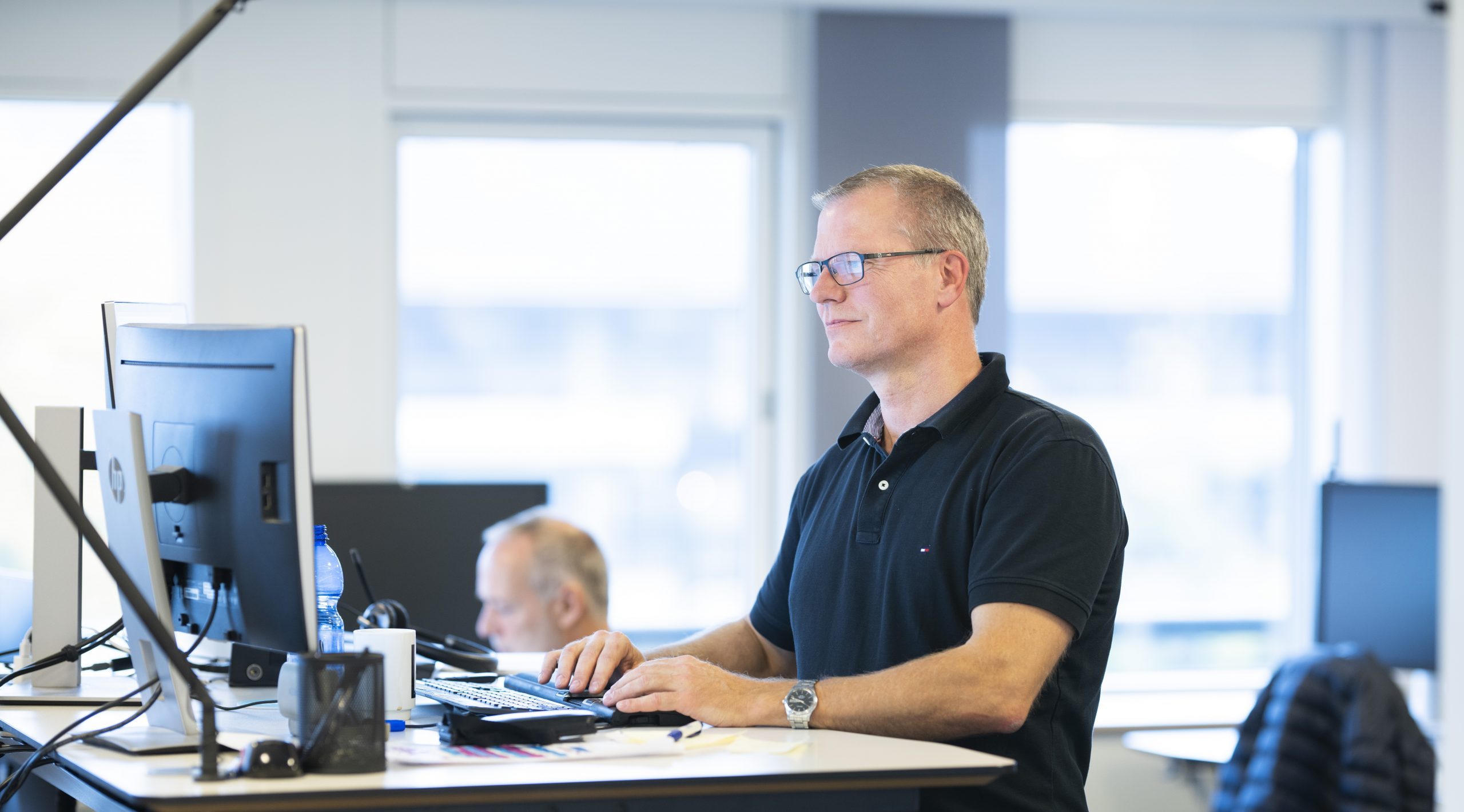 "Making databases run as efficiently as possible while ensuring they serve the needs of the end-users is what makes database work exciting," says Lars Hytting Christensen.

The necessity for user involvement was learned the hard way

Secretaries who had been tasked with entering data into the system soon found that instead of repeatedly entering many of the same data, it was much easier to copy a previous set of entries.
"We had simply not designed the system for that. So, when employees copied a set of data with refrigerators and then used it for freezers, they inadvertently renamed refrigerators to freezers—leaving us with no control over our data at all. It taught me that when working with a database, we must also consider the users who will be using it afterwards, making it a good idea to think about user involvement and talk to users first," he says.

{   ...that data was instead part of a new data warehouse that we built on the Oracle platform. And my first six-month contract ended up being five years. }

Work with us: Gain a valuable partner in your freelance career

Extracts of data opened for more sales at a telecommunications company

In addition, to his last two consulting assignments, ProData Consult also provided a project for a large telecommunications and Internet company. The project revolved around extracting data from an Oracle database to a SAS Institute system to make it easier for sales to make extra sales.

"At the end, it became relatively big and complex, and all of the data ended up becoming a part of a new data warehouse that we built on the Oracle platform. Basically, my first six-month contract ended up stretching over five years," he says.

As it is common for high-end consultants, Lars Hytting Christensen has had his fair share of extensions. On several occasions, he has experienced that a contract that was initially only meant to run for a few months ended up being extended to run for several years.

"And it is not due to delays in deliveries, but typically because the client will start a new project that I become involved in, or because permanent employees become engaged in new projects, and I am then asked if I would be able to take over some of the permanent duties of the permanent staff, "he explains.

Aircraft control moved from telex to a graphical user interface

He explains how the Flow project constituted a critical element in the overall coordination of airline air traffic in Europe, which is managed by the Central Flow Management Unit out of the Netherlands.

"When we initiated the project back in the 1990s, all communication was going through telexes back and forth. Moreover, you had several people running back and forth between telex machines and Flight Dispatch. Their job was to retrieve telex messages containing information on planes that could depart, as well as planes that had to wait due to, for instance, air traffic congestion down through Germany, etc.," he says.

To replace the telexes, Lars Hytting Christensen played a significant role in the creation of an object-oriented system that came with a database and a graphical user interface, which was of great benefit to Flight Dispatch and thus for the airline's traffic.

"It was a huge success. Over the course of three months, the project evolved from considerations about how we might be able to develop a system to help Flight Dispatch to having a functional system."

For the crew in Flight Dispatch, the new system paved the way for fewer people on duty. From previously needing about 30 people to direct the planes, you would instead only need five or six over the course of a day," says Lars Hytting Christensen.

Outside of the Oracle database sphere, Lars Hytting Christensen's experiences include other projects, such as an HTML and web-based project called "Disposal over Road" for the Danish Road Directorate, and an assignment as project manager for a financial corporation that involved moving a Java-based project to general operation.

With a degree in computer science from the early 1990s, Lars Hytting Christensen has been working with IT from its inception until now; most notably, he helped moved an airline's air traffic from telex-based messages to modern IT systems where information is constantly updated.

For the past 14 years, he has worked as a consultant, with a string of exciting assignments provided via ProData Consult.

Get assignments as high-end IT consultant